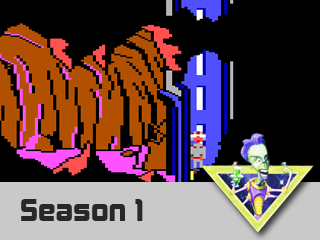 Episode 5: Below the Surface Pt. 1

So, it was time once again for another episode, and this one is called “Below the Surface Pt. 1” … so called because, well, we’re talking a two-parter here.

Yes, my fascination for all things secret and clandestine has led me to do not one but two (hopefully) fascinating insights into the stuff you can get out of the Space Quest games that you wouldn’t normally get to see the first couple of times you play through them. We’re talking easter eggs, hidden resource goodies, game glitches; the works.

The centerpiece of this episode features old-timer Akril and newcomer BlockMaster talking about the stuff you can find by going through the resource files of the games. Akril did an amazing run-through of the various homebrewed software you can use for looking under the hood of these games, as well as a really staggering cavalcade of hidden/lost voice files that are lurking, unused and almost forgotten, on the Space Quest 6 CD. BlockMaster went even further, detailing what you can find in the other games of the series.

Akril turned her bit in in a timely fashion, but BlockMaster almost sent me on a nailbiting bender and delivered his bit just a day before the final mix was supposed to be delivered to the Space Pope for launch. I probably stressed the poor guy more than I should, but there seriously were a couple of moments there where I feared I’d have to do some serious dancing around the subject to explain why you’d have to wait until next episode to hear more about the cool stuff he’d found. Luckily, he came through in the nick of time.

In a similar nail-biting incident, poor Alistair Gillett (a.k.a. Spikey, proprietor of SierraMusicCentral.com) was supposed to submit a lengthy bit about the many unused music cues in Space Quest 6, but due to illness he couldn’t make it for this episode. So a fevered Facebook mail to Alan Luckachina ensued, asking him, quite frankly, if he wouldn’t mind being bumped up an episode (having originally been scheduled for the Christmas episode). Thankfully, Alan was game, and he turned in a hilariously scatterbrained bit of four game glitches he had found whilst playing the games, delivered in what I can only hope isn’t his normal speaking voice.

Don’t worry; you’ll still get to hear the magnificent work of Spikey, but you’ll have to wait until December 20th for that nugget. I’ve read the script, though, and it’s much more than just a tedious run-down of the various music cues. Dude went all out with different characters, voices, and has even dangled the hope of getting composer Neil Grandstaff’s input on the subject. Can’t wait to hear what he comes up with.

Once again, we are treated to the commentary of those fine musical gentlemen, Brandon Blume and Ken Allen, talking about the “Professor Lloyd” theme from Brandon’s metal medley of the Space Quest IV soundtrack. Brandon actually handed in his piece weeks ago, having done the rest of the year’s commentaries in one fell swoop, but after hearing Ken’s heartwarming words about his creativity, he felt compelled to re-record his bit to reflect on those compliments he received from Ken. It turned into quite a long and almost tearful meditation on the importance of a good game soundtrack that lasted almost twice as long as his walkthrough of the music piece itself.

The Christmas episode is coming along nicely. Not only is Rudy Marchant, proprietor and curator of the amazing SierraChest.com site, on board to talk about how awesome he is, and the aforementioned kick-ass bit from Spikey about the “secret” SQ6 soundtrack. But Brandon and Ken are also going to be talking about what is without a shadow of a doubt my favorite piece of music from the entire series, the “Format Countdown” music from Space Quest IV, and I plan to go all out on this one.

If any of you have any special renditions, remixes or recreations of that theme, please send them my way — because I plan to go ape on this thing. I’m gonna play that thing until you’re sick of it, and I don’t care in the slightest. I’m going to be rocking all the way from here to Phleebhut on that sucker and there is nothing you can do to stop me. So stick around for Part II coming out on December 20th, because this is going to rock your socks off.