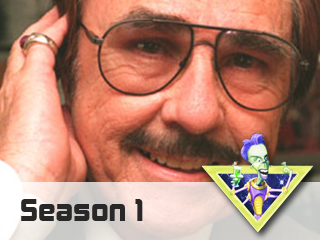 This episode came about mainly because I’m a sucker for literary theory and I had actually decided long ago that I wanted to do an episode like this. The “narrator figure” in adventure games is of interest to those of us who think about things way too long, because it’s sometimes an omnipresent figure, sometimes a subjective figure, and sometimes the narrator is completely absent and the main character narrates his/her own world. And the Space Quest series has an interesting switch that (I’m guessing) most people didn’t notice between 5 and 6, which was that the narrator suddenly lost his omnipotence (i.e. knew everything that was going on) and became subjective (frequently wondering what Roger was up to). He even started having conversations with Roger, effectively breaking the fourth wall between narrator and game world; something the series had never done before.

So I emailed The Two Guys, as I often do whenever I feel like annoying someone who should be working, about how they had envisioned the narrator. And Mark Crowe actually replied saying he wanted to set some time aside for this bit, ostensibly to record something for the podcast, but Scott ended up doing it – which makes sense, since he wrote most of the Space Quest games’ text, anyway. Mark my words, I will get Mark in on this podcast one day. (Oops; I just made a pun. Sorry, Scott!)

I also got some valuable input from Agustín Cordes, who at the time was a relatively new acquaintance, but we’d hit it off so well during our initial mating dance on Twitter and in subsequent email correspondences that he braved an Argentinian heat wave and the pressure of working on two games at once (Asylum and the aforementioned Serena) to contribute his bit.

And as a cherry treat on an already delicious ice cream sandwich I had actually interviewed Al Lowe, creator of Leisure Suit Larry, live over Skype — something I rarely do (I always prefer pre-recorded stuff, but Al said, “If we’re gonna talk about the narrator, we should do what the narrator and Larry always does in my games – we should have a conversation!”). And it was one of the best chats of my life; Al was so nice to me during the one hour we had, and then … turns out the piece of shit software I used to record the chat had crapped out on me only two minutes into the conversation. I was livid, and poor Al was very understanding but did not have time to get a pre-recorded bit in before the deadline. So I had to settle for just reiterating what he had said during the chat. It was a real pity, too; there was some juicy stuff in there that I don’t think has come out during any other interview. I’m hoping I can get the kind man to repeat some of what he said in a future podcast. It had to do with voice technology. Maybe an episode on Sierra tech is in the future? Well, there’s an idea.

Oh, and finally, a word about the fictional characters that crop up in these podcasts. We’ve already been introduced to Chuck Clusterbluck in The Narrator episode, and he was supposed to make a return appearance in the Serena episode, but things were in such a rush that Tom King (who plays Chuck), his co-writers (yes, he has a team) and I didn’t have time to get it together in a sensible fashion. So we’re gonna get to Chuck’s origins and what that whole thing about him fleeing the Sequel Police was all about in due time. We’ve actually been working out a whole story arc for Chuck’s character to take as he careens about the Space Quest timelines– well, that’s all to come. I won’t spoil the surprises. Suffice to say, we’ll be hearing a lot more from Chuck in the future.

And Pete Toleman, our favorite English loudmouth, has his own story arc coming up as well. Gareth recorded what I think was his funniest bit yet for the Serena episode where his Kickstarter campaign to save his company Priapic Mountain suddenly gets funded by a single donor, who turns out to be– well, you’ve heard it already, haven’t you? So we’re now brainstorming with the real Serena herself to see where we can take this fantastic turn of events. All we know is, it’s gonna be surprising and unexpected.

I always loved blurring the lines between reality and fiction, and this podcast enables me to do so quite easily, but it’s really because of these fantastically creative people who are willing to contribute and create these characters that makes it all happen. Because otherwise I’d have to sit there and do silly voices on my own — which I can, but it wouldn’t be nearly as interesting nor funny — and I just really wanna thank the guys who do these bits for me (in their spare time for no discernible reward, mind you). The podcast is all the more interesting for it, and you really surprise me time and time again. That goes for you, too, SteveBot! 😉