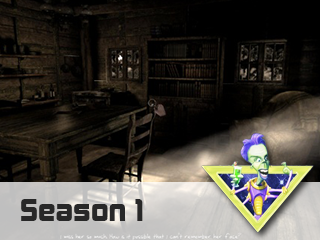 The Serena game, which is out on Steam now for free, has been taking up a bunch of my time since Agustín Cordes of Senscape proposed Frederik, Simo and I to work on it. And over 80,000 people have downloaded it so far, which is quite spectacular!

So episode 9 was actually supposed to be about the Space Quest fan fiction novels that were written oh-so-many moons ago. But that show’s put on hold — not because of Serena, actually; I was gonna mention the game anyway; but because of some schedules that couldn’t get together in time. So I suddenly found myself pressed for any content at all and decided, hell, let’s just make the whole episode about Serena.

Thankfully, my wonderful colleagues in the “Secret Dev Team” that put the game together rallied to my support at very short notice and delivered recorded memories of their experiences of putting the game together. It was really sweet of them to do this only literally days before the deadline for the podcast’s delivery. So it was a scramble to put together, yes, but everyone was fantastic.

And wouldn’t you know it — making haste doesn’t actually pay off in the end, because I had to resubmit the podcast not once, but twice; first because of an editing mistake I had made where I suddenly started talking over Brandon and Ken’s bit at the end and also to a flub that Simo had put in his spiel, owing to the absence of gender-specific pronouns in the Finnish language, and then once again because I fucked up the insertion of his retake in the file. So poor Chris Pope had to download and publish this podcast a grand total of three times before we wound up with a version that wasn’t chock full of errors.