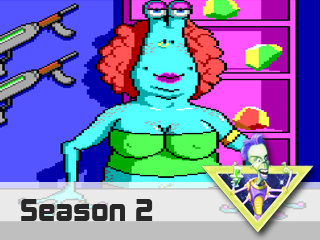 Well, this one was a whopper. Little over two hours, in fact! Much of that, of course, is owing to Ken Allen’s fantastic interview with Frank Klepacki (part 1 of 3), which runs at a little over 20 minutes.

But, that aside, the interviews with the three developers are really what’s at the core here. I was incredibly fortunate to get interview responses from all three developers. And, despite my urging that they just use my questions to create their own run-on spiel about their games, they just replied to my questions one by one — which is fine, because it gave me the excuse to invent the “Interview-o-Matic” (which is really just this free online text-to-speech engine set to the “Ray” voice).

Oh, and Vaughn (Vonster D Monster) really went all out with his interview. I loved how he took “personal offense” at my inability to finish his game. Truth be told, at the time I wrote the interviews (this goes for all three interviews, in fact), I hadn’t finished a single one of the fan games. After the interviews were done, I played all the way through Space Quest 0: Replicated and Space Quest -1: Decision of the Elders, but Vonster’s Space Quest: The Lost Chapter crashed on me. And things didn’t fare better when I tried playing it through NAGI. But it’s probably just my computer configuration; I don’t think there’s anything wrong with the game itself, because other people have played it and they seemed to do fine.

And if you’re wondering about Pete’s little intro there — well, occasionally, when Gareth sends me Pete-bits, he sometimes throws in a little extra for me. Usually I put these at the end of the show, but him singing the SQ1 theme with himself was just too good not to throw in as an intro.